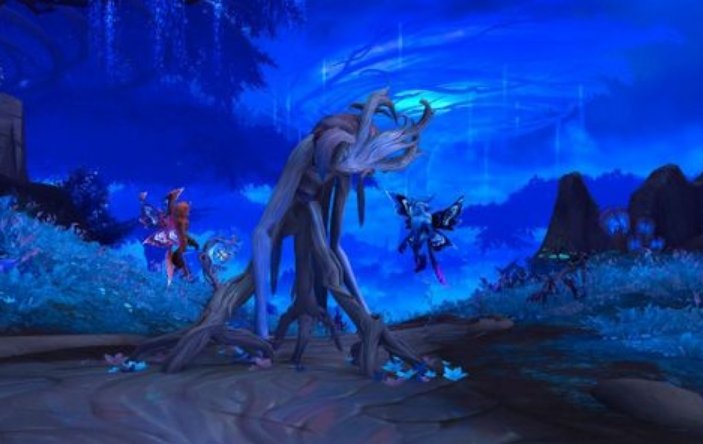 Oranomonos is the world boss of Ardenweald in World of Warcraft: Shadowlands. To defeat her, Healers and evasive moves will be especially important.

Each of the main leveling zones of World of Warcraft: Shadowlands is home to a Covenant that plays a key role in the afterlife, but it is also the location of an extremely powerful world boss. One of the new features of Shadowlands is the appearance of these world bosses. Once a week, one of these creatures will spawn, and players will need to go defeat them for a chance to earn powerful loot and extra Soulbind conduits or Legendary Powers. They will rotate each week, so if players miss one, they will have to wait another three weeks to have the chance to access a specific world boss’ associated loot. The world bosses will appear as a world quest on a player’s map, and regardless of their Covenant affiliation, they will be able to try their hand at defeating one.

The four world bosses are Valinor, the Light of Eons in Bastion, Mortanis in Maldraxxus, Nurgash Muckformed in Revendreth, and Oranomonos the Everbranching in Ardenweald. According to lore, Oranomonos was the eldest guardian of Tirna Scithe, but has since wilted along with the great tree. She appears as a treelike creature that Gorms feast upon. Though she is dying, she is still a powerful entity and will likely give players a challenge. Her Seeds of Sorrow can bludgeon even the heaviest tanks, and players are going to want to team up with some exceptional healers to counteract this. Here’s how to defeat Oranomonos in World of Warcraft: Shadowlands.

How To Defeat Oranomonos In World Of Warcraft: Shadowlands

As with most of the world bosses in Shadowlands, players should consider completing this fight with a party. While it can be done alone, defeating any one of these bosses is a difficult endeavor, and players can greatly benefit from working together.

Oranomonos spawns in Tirna Scithe on the southeastern part of the island. She has six possible attacks, most of which deal Nature damage. These are:

To withstand these attacks, players are going to need to be as mobile as possible and be prepared to heal frequently.

No matter what kind of character a player is using to fight Oranomonos, they will want to move away from her when she starts to use Seeds of Sorrow and avoid the path of her Withered Winds to escape the brunt of her damage dealing. Damage dealer characters should try to land a hit to interrupt Oranomonos when she tries to cast Regrowth to prevent her from self-healing. Tanks will need to withstand Implant many times. Because of this, they should keep an eye on how the effect is stacking and swap as needed.

Healers will be especially useful against Oranomonos, and players grouping in a party will want to be sure to have several. Healers should dispel any Rapid Growth effects from their teammates. When Oranomonos begins to use Dirge of the Fallen Sanctum, all players should group together so the healer can use their best AoE healing abilities on everyone. Players should also consider using defensive cooldowns while grouped together to better withstand Oranomonos’ attack.

When defeated, Oranomonos will drop one of the following:

All items will be level 207, with the exception of the Legendary Powers, which is about the equivalent of what can be obtained from a normal difficulty Castle Nathria Raid. Players should be sure to return the Memories they pick up to the Runecarver to be used when crafting Legendary itemPost

World of Warcraft: Shadowlands is available for PC and Mac.