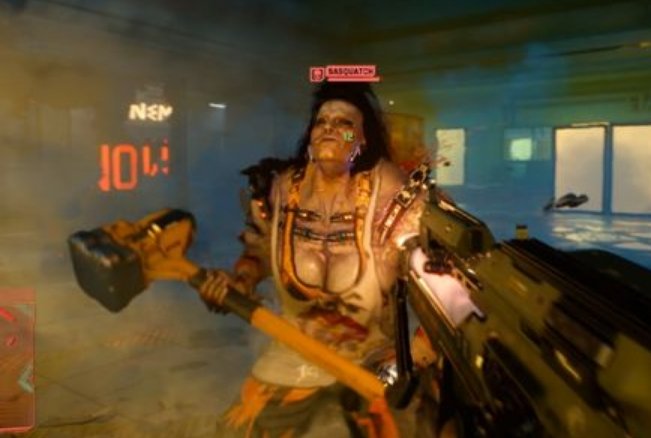 Cyberpunk 2077 has a boss named Sasquatch, and she is a big melee brute who can be taken down with some agility and well-placed headshots.

Like any CD Projekt Red endeavor, Cyberpunk 2077 offers fans a plethora of ways to tackle various missions and enemies. Whether someone gravitates more toward a stealthy Cyberpunk ninja type of character or a Rambo aspirant, there is always a way for them to conquer a given objective. Some tasks mandate certain tactics, while others leave it up to the player to decide the proper approach. Bosses, however, require tact and a well-equipped character to defeat, and Cyberpunk 2077’s Sasquatch is one fight where having a diverse character build is advised.

Sasquatch, also known as Matilda K. Rose, is a tough character that players confront during the “I Walk the Line” mission. This cybernetic hulk of an opponent is in front of the Hator Theater, talking with someone on the phone. Weak to fire and resistant to electricity and hacks, Matilda is no slouch when it comes to a confrontation. Upgrading the Reflexes and Cool attributes in Cyberpunk 2077 prior to this fight is encouraged.

How To Defeat Sasquatch In Cyberpunk 2077

There are a couple different tactics players can use to defeat this boss. However, it should be noted that Sasquatch has a self-healing mechanic that can make this fight drag on if not addressed. There is a glowing purple crystal on Sasquatch’s back that heals her periodically. It is recommended players sabotage that crystal to make the fight less arduous. Doing so prevents the boss from healing herself.

The best approach is beginning the fight from stealth. Players sneak up on Matilda while she talks on the phone and apply one of Cyberpunk 2077’s quickhacks, such as short circuit, to disable the crystal on her back and stun her, allowing V to dish out some meaty damage with guns, blades, or blunt objects (neither of which are recommended for this fight), or grenades before Sasquatch gets back on her feet.

Once she gets up, she will either run to get her weapon of choice, a massive hammer, or rush the player to whack them with furious fists. Being a melee brute, Sasquatch is super strong. However, she is also slow, so dodging her attacks is in players’ best interest and can be pulled off with proper timing. While dodging, and if the crystal on the boss’s back has been disabled, send as many bullets into Matilda’s thick skull as possible.

Shooting her in the head is the key to dishing out the most damage and ending the fight quickly once the crystal is sabotaged. For that reason, and because Sasquatch is a behemoth up close, ranged weapons are more prudent. A good precision rifle, revolver, assault rifle, or shotgun is efficient for whittling down Matilda’s health.

During the encounter, Sasquatch will grab players and infect them with a virus their handy tech partner, Placide, will try to counteract. The virus is not a big deal; it mainly flashes numbers (zeroes and ones) on the screen and can be a bit distracting. However, once Sasquatch releases V, gamers can continue using the same strategy of dodging and skull shooting. Applying a quickhack that sets the boss on fire is also useful for some periodic damage effects.

Be sure to avoid Matilda’s dash ability, which allows her to almost appear in front of V instantly. Proper dodging is the remedy to this. Players cannot miss this ability, as it is telegraphed with a flashy animation that turns Sasquatch into a blur.

With enough shots to the head, players will have taken down Sasquatch, and they will be rewarded with some random loot.